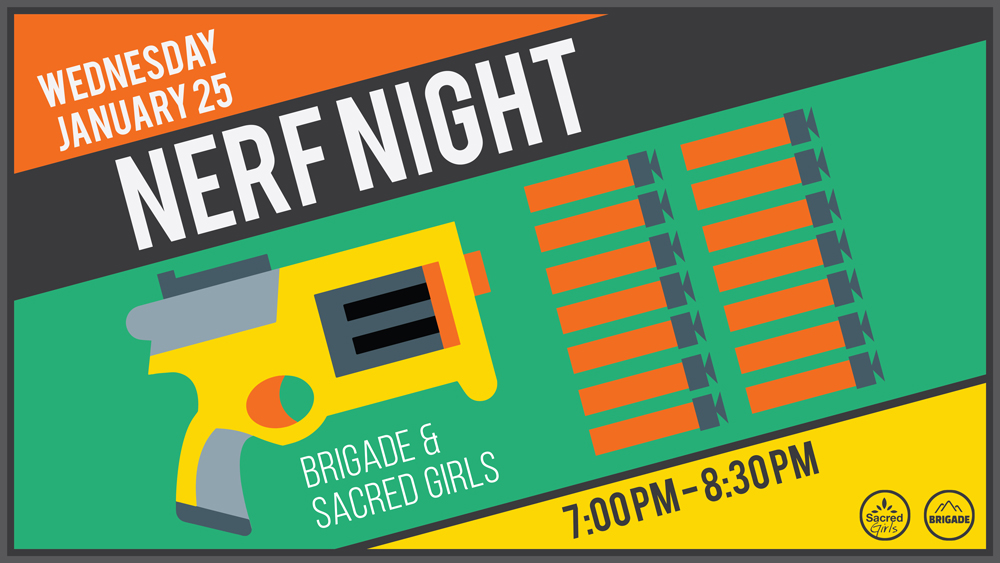 We hosted this event for our Brigade Boys & Sacred Girls. Both groups are Grades 1-6. This is one of their favorite events of the year! I seriously had Moms texting me telling me it was the first thing their child mentioned when they woke up that morning.

Here is the timeline we used for Nerf Night:

I think the environment creates a lot of excitement. So I do my best to have a wow factor as kids arrive.

Here’s what the kids did:

Check-In – this is our usual check-in system and it’s a great way to capture visitors information.

Turn in Ammo – This saved a huge headache. In past years we had tons of kids trying to find their exact darts after the event. This is nearly impossible. We collected anyone’s darts as they arrived and put them in a ziplock bag with their name written on the bag. They could pick them up after the event. Everyone was given a pack or two of 10 darts that were handed out at a specific time – that way they wouldn’t start firing right away.

Pickup Goggles – We purchased enough goggles so every child had a pair. (See below for link).

Sit in chairs at Command Center – When they were done with these steps they could sit and wait for the safety briefing. Nerf Darts – We purchased these nerf darts on Amazon. Buy enough so that each child has at between 10 and 20 darts.

Goggles – We purchased these goggles on Amazon.com. They worked great. Fit the kids well.

Extra Nerf Guns – Either purchase some extra nerf guns for visitors or kids who don’t have any, or ask parents if they can bring extras.

We stacked all of the chairs in our auditorium, and then used some of the stacks of chairs, along with black curtains, as barriers. We placed the stacks of chairs back to back to reduce the risk of anything falling over. In the safety briefing, we covered how important it was not to climb on chairs. We set up about 3 large barriers on each side. We made this symmetrical – the same for both team’s sides. We ran a line of type for a center line. We also made a tape box for the starting box – each team had to be inside this for the start of the game. We also made a tape box for the jail for the capture the flag game. Registration / Welcome Table – You’ll want 2-3 volunteers to help with the registration table to get kids checked in, turn in ammo, and pick up goggles and a headband.

Referees – We got by with 3 referees, but the more the better. We gave each volunteer a referee shirt and a whistle. When kids were out you simply blow the whistle and point at the child. Then they would go to the ‘out area’ where they would wait for the next game, or until a grace-filled ref would send them back in early. 🙂

Target Practice / Snacks / Devotion – We basically ran things as 2 teams. We had the Nerf Game referees as one team and the Lobby activities as another team. The Lobby will need 3-5 volunteers to run all of their activities. Team Battle – This is a nice simple game that we played the majority of the time. Start with two teams lined up in their starting area box. The rules are (1) They can’t cross the center line. (2) If you get tagged (shot) you are out. (3) When a team shoots all the other team’s players they win. We never actually had a team win. They just had a ton of fun playing. When things got slow and their were only a few players left (who sometimes would never risk gettting shot) – we would declare a winner, or just start a new game.

Capture the Flag – This is just like standard capture the flag. We used a cone with a colored headband for the flag on each side. Here are the rules (1) You can cross the center line. (2) If you get shot, then you must report to the other team’s jail. (3) You can get shot anywhere on the playing field – no matter which side of the line you are on. (4) To win, you must capture the other team’s flag and bring it all the way back to your starting box without getting shot to win. (5) If you go to jail, you can be resuced if one of your players comes and tags you. (6) Your flag you are guarding goes inside your starting box. You can’t go inside the starting box after the game starts – that way their is no puppy guarding (standing too close to your own flag). (7) If you get rescued from jail, you get safe passage back to your side – doesn’t matter if you get shot.

Pickup Ammo – In between games we had kids ‘load up ammo’ for the next game. They scrambled around to find ammo all over the areans. We also had all the kids find all the ammo at the very end and put it in a big bin.

I covered all of these in the safety briefing:

We had two sessions in the Lobby – Target Practice (or basically a firing range) and Devotions & Snack. You can do whatever you want for

Snacks – You can do whatever you want for snack – we did small pop cans of sprite and bags of chips. Not healthy, but fun. 🙂 We did popcorn one year, and that was a mess.

Devotional – We showed a video from the Superbook app. The kids loved it. We even had 5th & 6th Grade boys shushing other kids so they could hear! Huge win.

Target Practice – We setup helium filled balloons and plastic cups all in one area in our Lobby. The cups were stacked in pyramids and placed on bistro tables and chairs. The cups and balloons were all different heights. We had rectangle tables that formed a wall for kids to stand behind and shoot. The loved it! Just as fun as the game time in the arena.

Ships & Sailors – This is a game I learned at a Youth Camp and it was a huge hit. You can watch this video to learn it.

I didn’t teach all the commands they used in the video. Here are the ones I used: We had all the kids turn in any ammo they had, turn in their headbands and goggles, and pick up any bags of ammo they turned in at the beginning. Then our normal parent pickup routine.

Hope you find this helpful!